From the moment former President Trump announced his candidacy in the 2016 presidential election, a target was put on his back. Establishment and Never Trump figures were furious when Trump not only won the 2016 election, but also survived two attempts to impeach him on bogus charges.

Even with Trump out of office, the relentless and malicious attacks against him proceed. This time, the former president is being accused of taking classified documents to his Mar-a-Lago estate. This is the excuse that was shared with the public back in August when the FBI raided Trump’s estate.

Despite the best efforts of all the Never Trump forces gunning against Trump, he’s still standing. This is very upsetting to Michael Beschloss, a presidential historian who made baseless claims about Trump over the weekend.

The Latest Narrative Revealed
During an interview with MSNBC, Beschloss claimed that Trump “sent a message” to his supporters and others that if he’s indicted, violence needs to break out.

After claiming Trump suffers from a “warped mind,” Beschloss told MSNBC that threats of violence following a potential indictment have been conveyed to the US attorney general as well.

MSNBC's Symone Sanders & pretend historian Michael Beschloss continued the network-wide push for a real conflict in America they started making up quotes from Trump to justify it.

Beschloss lied saying, "[Trump] is basically saying to Americans that 'there should be Civil War'" pic.twitter.com/mYGShFT9Ep

Before Beschloss’ interview wrapped up, he went on to say there’s never been a period in history where Americans have seen this from an ex-president. Of course, the presidential historian declined to cite specific instances in which he views Trump as having called for violence.

On social media, many Americans pointed out that Beschloss can’t cite these instances because they do not exist.

Not Beschloss’ First Rodeo
This weekend was far from the first time that Beschloss told outright lies that suit his own anti-Trump agenda.

Just earlier this month, the presidential historian was quoted as likening Trump and his supporters to “Hitler and the fascists.” Beschloss also previously insinuated that supporters of the former president pose a danger to democracy.

2/2 Beschloss now demonizing half America. Warns of a “movement… beyond Trumpism” who are a danger to “public safety”. Says they are against democracy and the rule of law.

At this point, it’s become more apparent than ever that Trump haters will never give up this vendetta against him. However, as Trump supporters continue coming under fire from the left, there are growing concerns about the implications this could have on public safety and society at large.

Recent polling has shown reasonable pluralities of Americans believe the outbreak of civil war within the next few years is a real possibility. 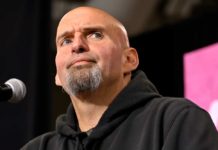