It’s not every day that you get to see a politician make an absolute fool of themselves, but Democrats are filling up more and more of our time with instances that they probably regret.

Speaker of the House Nancy Pelosi’s choice for the Transportation Committee, Eleanor Holmes Norton, (D-D.C.), allegedly crashed her vehicle and walked into the building without regard to anything “transportation.”

We should mention that Norton is 84 years old. Maybe Norton has been spending too much time with Pelosi at the bar. Check out the video here.

A man was with her and seemed panicked as he looked around to see if anyone saw the incident. When it was determined that nobody did, Norton walked into the building with no regard for her ridiculous parking position and how it would affect others getting into their vehicle and leaving. She didn’t leave a note or care whatsoever.

Thomas Massie tweeted, “Speaker Pelosi is seriously considering this person to serve as the chairwoman of the Transportation Committee. Folks, I’m not making this up.”

Currently, Norton is the Highways and Transit Subcommittee chair, making this incident even more hilarious. Maybe Norton could change the parking spaces’ dimensions rather than focus on the highways.

It is an excellent opportunity to bring up term limits in politics. Pelosi, President Joe Biden, Norton, and many others are well past their prime and cannot relate to anything that would be important to younger voters. They seem to forget that they work for the American people rather than bow to their parties’ desires.

Norton has been in office since 1991, meaning she has seen the beginning of many new aspects of politics and everyday life.

In 1991, the internet was recently made available, a desert storm was happening, and the entire economic structure differed. Electric vehicles weren’t available, cell phones were rare, television was beginning to expand, and the world looked different.

All of that to say that the responsibility and the future goals that people in politics had in 1991 are very different now. We have problems if a different mindset isn’t found between 1991 and 2022. That’s likely why the political structure is the way it is right now, and too many people have outdated mindsets. There needs to be a complete overhaul of term limits in every political office. It’s getting out of control. 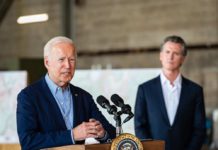