Allison Fluke-Ekren, 42, was sentenced by a federal judge on Tuesday to 20 years in federal prison to be followed by 25 years of supervised release for leading an all-female ISIS battalion in Raqqa, Syria. She grew up on a farm in Overbrook, Kansas, before becoming a terrorist enemy of America.

At the sentencing hearing, Fluke-Ekren’s own children gave victim impact statements in which they asked the judge to impose the maximum sentence under the law against their mother.

Allison Fluke-Ekren Provided Military Training to Over 100 Women and Young Girls in Syria on Behalf of ISIS and Committed Numerous Other Terrorist Actshttps://t.co/BA4qq50Nf9

The defendant spoke on her own behalf at the sentencing hearing and delivered a mixed message. She tearfully told the judge, “I deeply regret my choices, but I also deeply sympathize with women abused and raped in Syria.”

Fluke-Ekren had previously pleaded guilty pursuant to an agreement with prosecutors. As a result, she admitted in court that she had translated and analyzed documents removed from the U.S. Consulate in Benghazi, Libya, after the deadly terrorist attack there on September 11, 2012.

She told the judge on Tuesday that during the seven years she was in Syria she was afraid of her “conduct in Benghazi.” “I just didn’t see a way out,” she said.

She tried to soften her behavior by telling the judge that most of the time she was in Syria she was being a mother to her several children and caring for other children.

U.S. District Judge Leonie Brinkema said she did not find the defendant’s excuses to be credible. Brinkema added that Fluke-Ekren was trying to downplay the impact she played in the Benghazi attack.

Judge Brinkman told Fluke-Ekren: “I don’t believe you were a passive dupe. You knowingly and voluntarily were an accessory after the fact.” She added that there was no question that the defendant was “providing material support for a terrorist organization.”

Layla Ekren is one of the defendant’s adult children who addressed the court during the sentencing hearing. She was visibly shaken and trembling for almost an hour before it was her time to speak directly to the judge.

She described one occasion during her childhood in Syria when the family had lice infestation. She said her mother held her on the ground and poured medicine on her eyes in what she said was an attempt to blind her.

She also described how her mother attempted to force her into a marriage when she was 13. Layla Ekren said her mother planned to pair her with a “random ISIS fighter as a sex slave.” She added that she has felt degraded her entire life.

Judge Brinkema questioned Fluke-Ekren about the attempt to force Layla into a marriage against her will. The defendant only said, “She was a few weeks from turning 14.”

The government’s sentencing memo presented to the judge indicated that the defendant also urged a woman to commit suicide through a homicide bombing. It also said she attempted to gain favor with other terrorists by claiming that her oldest son was born as a result of rape by an American soldier.

The sentencing memo went on to say the defendant “brainwashed young girls and trained them to kill.”

Gabriel Fluke is the defendant’s adult son and he told the judge on Tuesday that his mother had “piece by piece taken away every friend and family” he had ever known. 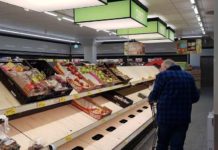