Amid Republican governors refusing to stand by and let illegal immigration overrun their communities, migrants are being shipped to Martha’s Vineyard and different sanctuary cities.

This has now put a national spotlight on the reality that the southern border is out of control. Under the Biden administration, there have been historically high amounts of unlawful crossings.

Moreover, the migrants being shipped to various left-wing cities are a drop in the bucket, compared to what border states are up against.

As more and more attention gets directed toward illegal immigration and issues with the southern border, the White House still isn’t being honest.

Revisionist History from the Biden Administration
The president is outraged with Florida Gov. Ron DeSantis (R) for daring to send migrants to Martha’s Vineyard. Yet, at the same time, Biden won’t take measures to secure the southern border and remove the root cause of migrant dispatches.

Q: “The bussing aside, how do you explain this influx” of illegal immigrants?

Karine Jean-Pierre: “We have taken unprecedented action to secure our border.”

According to Jean-Pierre, the White House has taken measures that are “unprecedented” in the name of border security. If this were true, there wouldn’t be so many crossings that cities along the southern border can’t handle them.

Later, the White House press secretary claimed the administration is working on a system that makes processing individuals at the southern border easier.

What Jean-Pierre Won’t Talk About
The White House press secretary has a longstanding history of making claims about the southern border, and the Biden administration’s approach to border crossings, that simply aren’t true.

However, because of her comments, Sen. Ted Cruz (R-TX) previously invited Jean-Pierre to come with him to see the southern border for herself. Even as the White House press secretary has not taken Cruz up on this offer, he’s been clear that the invitation still remains open.

Come to Texas & the Rio Grande Valley— spend just 1 hour on the border. I promise, we’ll see illegal aliens walk across the border.

Ultimately, no matter what Jean-Pierre or others in the Biden administration claim, Americans can see the southern border is not secure. They can see the White House has not taken “unprecedented” steps in the spirit of maintaining border security.

This is something Democratic governors of sanctuary cities are witnessing firsthand as buses of migrants arrive in their communities. 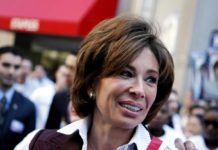